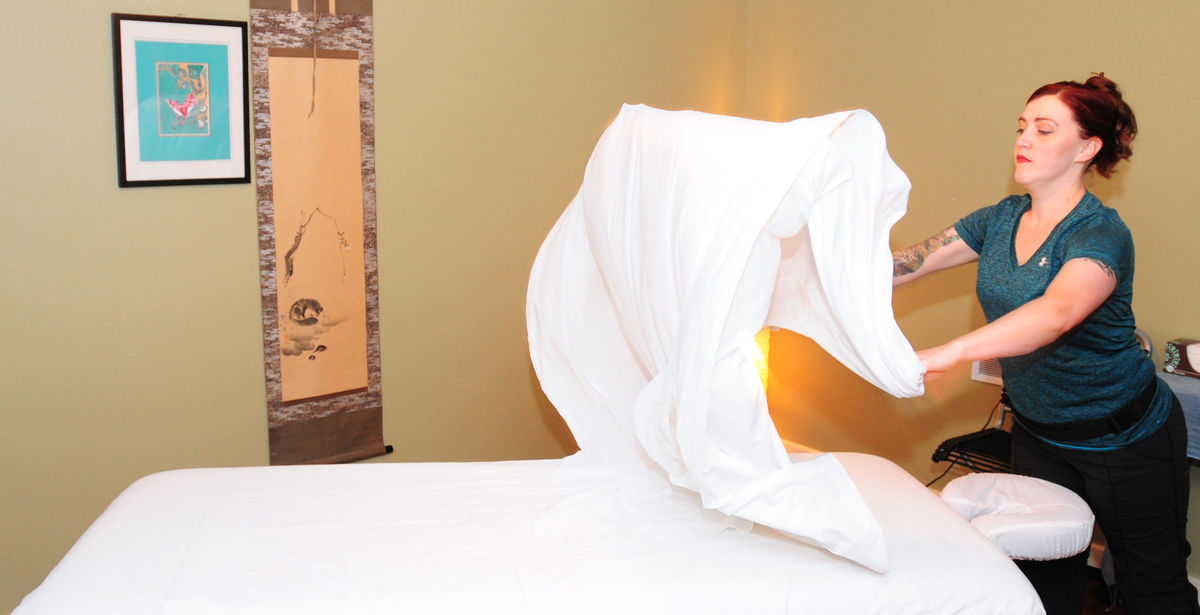 Logan yoga studio Tanaka Balance is adding a new member to its team, with newly graduated massage therapist Kassie Cressall opening the doors of Foxfire Massage Therapy this Monday at 34 Federal Ave. and bringing an expansive knowledge base toward holistic bodywork.

“I think my education has allowed me to develop a unique skill set,” Cressall said. “I think it helps me stand out.”

Cressall first went to school for veterinary science but soon decided that path wasn’t for her. Despite her strong background in medicine, including time as a phlebotomist, caregiver and pathology lab clerk, Cressall had no interest in pursuing nursing.

“I was thinking back to what has always been a constant, which is massage therapy,” she said. “I’ve been the recipient of body care my whole life, including massage and traditional Chinese medicine. It’s always been in the background of how you can take care of yourself.”

Cressall made the decision to study massage therapy in 2013, choosing the Health Works Institute in part due to its multidisciplinary curriculum and its 1,000-hour requirement, which would allow her to receive licensing in most states.

“If I was going to reroute my life, I wanted to go to a school that would give me the tools that would help me succeed for as long as I want to do this,” Cressall said.

Cressall draws her studio’s decorations as well as her health philosophies from Japanese culture, which she developed a deep appreciation for following eight years of martial arts training.

“The Japanese outlook on holistic care has always resonated with me,” Cressall explained. “There’s a whole person in front of you to care for. There are different influences that may be affecting their health, but if you look at the whole person you can see the pathways to where health is possible, or where there’s dysfunction that you can help. Having that mindfulness with the client is powerful. It’s why I use the Foxfire name, to remind me of where I want to come from.”

The “Foxfire” name is both a reminder of a nickname that one of her old sensei bestowed upon her, and also as a representation of the belief of intrinsic healing that comes from massage.

“Foxfire is a naturally occurring bioluminescent light, and I very much view healing in the same way,” she said. “People carry their own healing abilities within themselves. I don’t cure or heal people by myself. All I do is turn that attention to their own abilities so they can heal themselves.”

Cressall pointed out the positive health aspects of a massage, which she said can be helpful for clients with fibromyalgia, joint pain and PTSD among other maladies. She also said that massage is falsely seen as a mere luxury, while she believes that it is a necessity “just like good food and good water.”

“Massage is for everybody,” she said. “It’s self-care. It’s a very real path to wellness and well-being. We’re so outside of our bodies that we don’t often recognize when we’re in pain. A good massage brings an awareness that everyone can benefit from. Good body work can change your life.”

Foxfire Massage Therapy will open to the public Sept. 21, holding an open house from 4 to 6 p.m. Cressall will give free, short massages, and Tanaka Balance will provide food from its attached health cafe. For more information, please visit www.foxfiremassage.com.

This site uses Akismet to reduce spam. Learn how your comment data is processed.